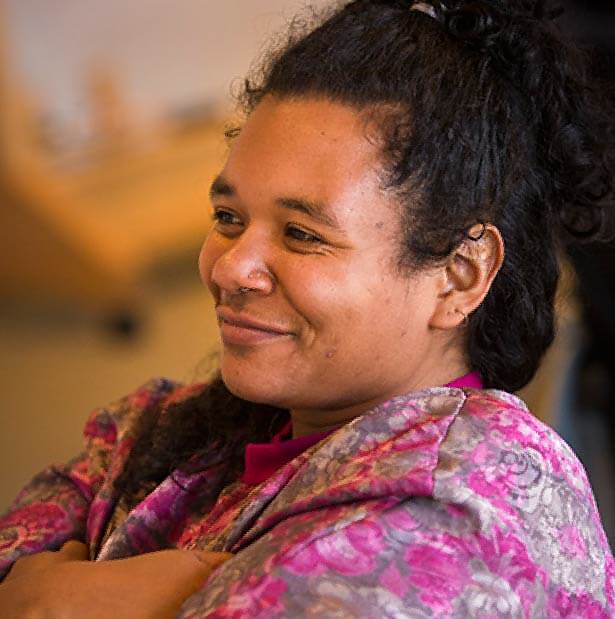 For Mo! a ‘people’s economy’ puts the values of people and planet over profit. It’s about putting the decision-making power in our economy back in the majority, rather than the minority who own most of the wealth.  Its businesses that serve the needs of the community, and understand what communities want through listening directly to the communities most in need. But it’s not just businesses, it’s the whole ecosystem of institutions that make up our economy. These institutions include anchor organizations, like hospitals and schools, land and property, and others that control many of our basic needs.

Mo! grew up in a community of social justice organizers in Chicago.  Her first experience with a people’s economy came when she moved out of her Mom’s house at age eighteen and into Stone Soup Cooperative. Living at Stone Soup she witnessed a highly effective, democratically run organization that provided affordable, communal places to live. Through this experience she also learned about other cooperative enterprises like worker cooperatives and consumer cooperatives, and has pursued that interest ever since.

Moving to Seattle, Mo! began her organizing work by supporting Seattle Young People’s Project’s Education Justice Campaign, which targeted the drastic racial disparities in school discipline rates in Seattle schools.  Later, she got connected to Got Green and became the Young Leaders in the Green Movement Program Organizer. Today the Young Leaders campaign centers on creating 100 living wage entry level jobs in the green economy for young people of color.

When Got Green was asked to join the Lab, Executive Director Jill Mangaliman saw a connection between the work Got Green was doing to build a healthier economy and financially stable communities and what the Lab hoped to accomplish. Got Green’s new jobs campaign was underway, and the Lab offered an opportunity for a new conversation about how to get people out of poverty and create a healthier world at the same time.

Key to Mo!’s participation was a video sent to potential Lab participants. This video resonated with Mo! for two reasons. One, Mo! has worked in People of Color led organizing groups that would often get critiqued from white organizers or white led organizations for being too radical in their calls that  another system was necessary. Right from the outset of the video, speaker Deborah Frieze, says, “You can’t fundamentally change big systems. You can only abandon them or give hospice to what’s dying.” Mo! was pleasantly surprised that Deborah a white woman who was a former executive in the high-tech industry was saying this and even more so that this was the message that the Lab wanted to send to interest participants.  Also both the video and the Lab think about growing the scale of a people’s economy to support everyone. As Mo!’s mother is chronically ill and unable to walk a block without needing to take breaks to breathe. Mo! often thinks of her mother when thinking about what people led transition is needed to support folks like her mother.

For Mo! It was clear from the events and aftermath of Hurricane Katrina, that as Naomi Klein quotes, Curtis Muhammad, a longtime New Orleans civil rights organizer, in her book No Is Not Enough, who said this experience [Hurricane Katrina] “convinced us that we had no caretakers.”  We need other options other support systems and an economy that we make for ourselves. Or as  Grace Lee Boggs says, “There’s an opportunity for a new society to be built on people who are transforming themselves and who are not just opposing those who oppress them.”

Mo! Is excited to be working on the whole picture, to create a shared vision of a people’s economy, to be able to see what’s missing and what we need to fill in to get to that vision.  To create sustainable economic options for people.

She’s also looking forward to doing community listening sessions. To do the critical work of  listening to the people most affected to shape the Lab’s work.  For the Young Workers campaign they spent two years doing community based participatory research to build their campaign.

Moreover, Mo! noted that middle and upper class white people have historically been the face of the economic development in Seattle, with people of color and workers as recipients, not leaders. Manuel Pastor clearly lays out that a growing share of the population are people of color, and its not from immigration, but the children of immigrants. Communities of color need leaders that represent them and look like them, so groups shouldn’t shy away from doing the work necessary to become truly racially diverse.  Mo! is optimistic about the Lab’s intent to support leaders of color in the economic development space, to be more explicit about the leadership of communities of color, and to break up norms that have built an economy we know is not working.