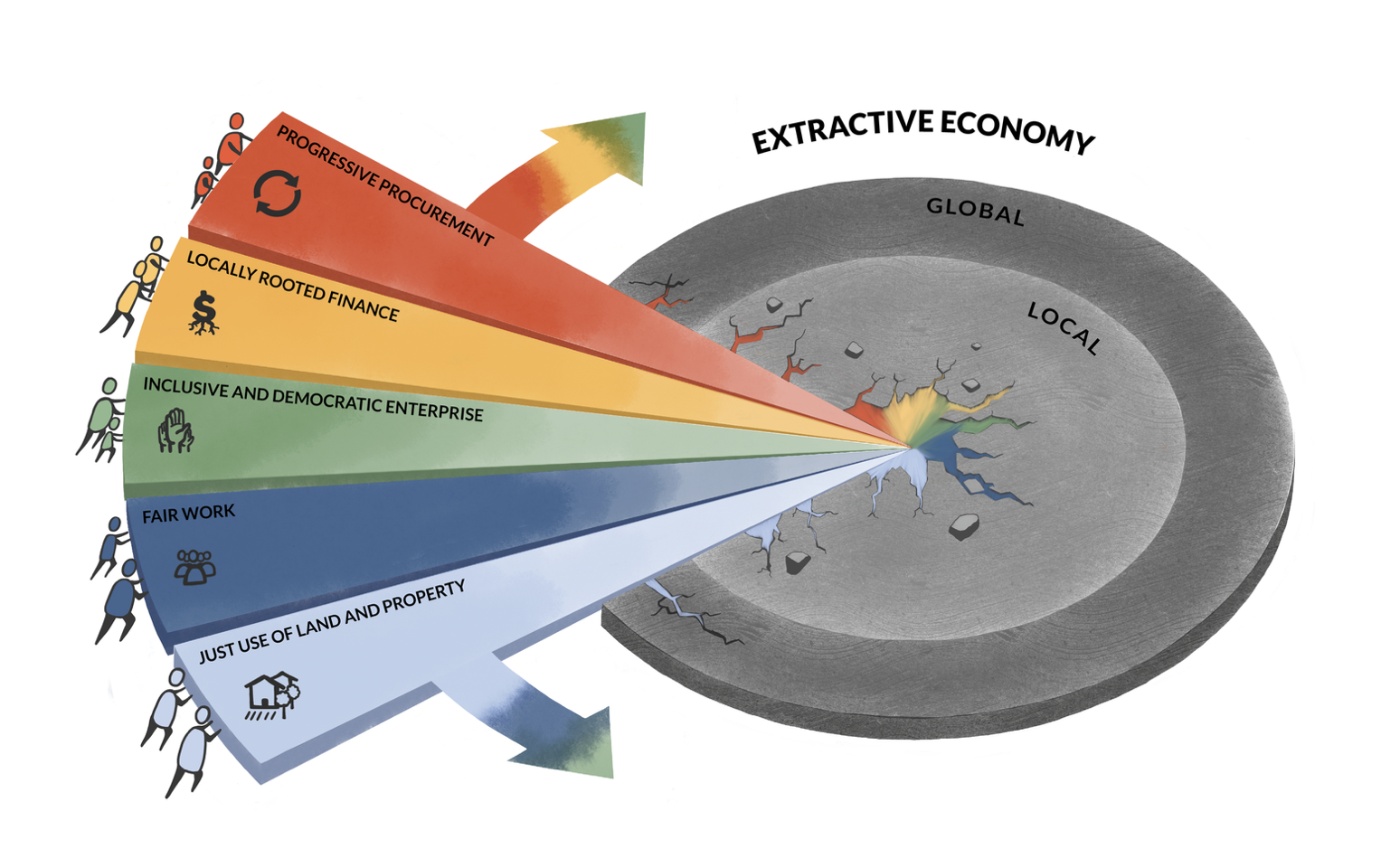 According to Movement Generation’s Just Transition Framework, each economy has a purpose, an outcome we choose to manage toward. It may be the accumulation of money and the enclosure of wealth and power, which we see in practice here in Washington, the United States, and many other places across the world. But the purpose can also look different. We can design an economy and manage it toward universal well-being, healthy soil and food, clean water and air, and justice and freedom.

Prior to colonization and enslavement, and even amid ongoing colonization, racism, and exploitation, many Indigenous and Black communities have cultivated economies that manage toward collective well-being. For example, Pacific Northwest tribes traditionally held potlatch ceremonies, through which wealthier community members shared their abundance with those who had less. And across the U.S., Black communities have created mutual benefit associations and other formal and informal networks to ensure community care in times of need, such as death and sickness.

The dominant economy in the U.S. is an extractive economy, built on the foundations of stolen land and slavery. Systemic racism is indelibly ingrained in our current economic system, resulting in a racial wealth gap between Black, Indigenous, and people of color (BIPOC) and white Americans.

The racial wealth gap is traditionally understood as the disparity in wealth between white people and people of color. Hundreds of years of structural racism have deprived BIPOC families of assets and resources that accumulate and transfer from one generation to the next. The racial wealth gap results from the accumulated effects of four centuries of systemic racism that have produced the enclosure of economic power and wealth within white communities and stripped power and wealth from BIPOC communities.

Seattle is one of the most prosperous, educated, and politically progressive major cities in the United States. However, our local histories and socio-economic realities reflect the dominant arc of racial injustice that we see across the nation.

Although local wealth data is fairly limited, Prosperity Now’s 2021 report, “The Racial Wealth Divide in Seattle,” highlights clear indicators of the significant economic disparities that are experienced by BIPOC communities in Seattle:

In an effort to address the racial wealth gap in Seattle, in 2022 the City of Seattle’s Department of Neighborhoods (DON) initiated a research project to explore generational wealth building strategies in Seattle’s BIPOC communities.

The community wealth building framework is especially powerful as the defining framework of a local government. It’s made for cities and localities not satisfied with tinkering around the edges, who are ready to reset the system entirely. It challenges the failing approaches that have been widely accepted in American economic development for too long and addresses wealth inequality at its core. Citywide community wealth building initiatives have been implemented in Chicago, Atlanta, and Cleveland.

As part of this research project, three community-based partners–Wa Na Wari’s CASE21 Project, Villa Comunitaria, and sləp̓iləbəxʷ (Rising Tides) Indigenous Planning Group–conducted participatory research in three Seattle communities/neighborhoods. We plan to share their findings in future blogs, so look out for those.

In 2023, Community Roundtable members will pilot projects to test some of the community wealth building strategies we researched and discussed in 2022. People’s Economy Lab is excited to continue in a consulting role! We’ll share more as these projects develop.