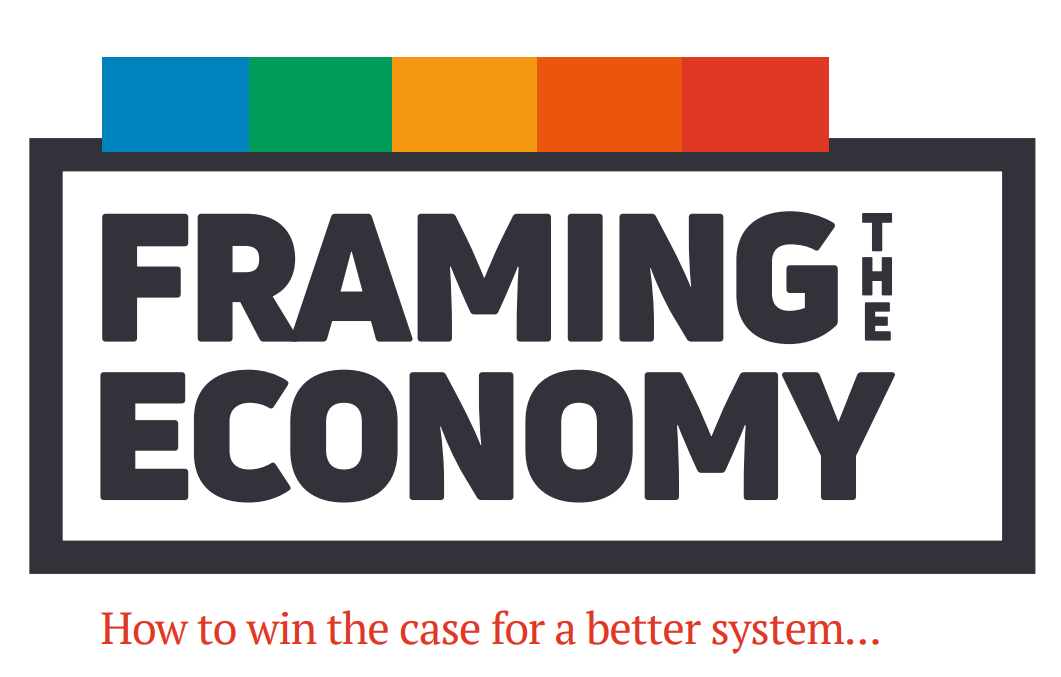 A new report shows that people largely don’t understand the economy and believe its a force of nature rather than something we created and can change.  But all hope is not lost, tapping into key concerns can like inequality, power, and fulfillment and using promising frames like reprogramming or laying new tracks can open up space for reframing the economy as a human creation that we can make better.

Those were key findings from a UK collaboration of new economy organizations and communications organizations that produced a new report tackling the challenge of Framing the Economy for a better system.  The project included extensive individual interviews and surveys of over 6,000 people in Britain, analysis of framing literature, and review by a network of experts.

The Project set out with the goal of reversing economic inequality and extraction built on the power of a small elite, dismantling the domination the control of natural resources and speculation as economic good, and the theory that markets always know best. They sought to move public opinion toward a vision of everyone having a good and fulfilled life through democratic ownership, collective provision of basic needs, and cooperation and sharing.

At the beginning they found that the British public draws on “powerful but thin” models to think about what the economy is and how it works.  These included 1) the Economy is Money 2) the Edge of Disaster (the economy as a natural phenomenon) 3) the Economy as Container (you put in and take out) 4) Mysterious Market Forces 5) Economy vs. Environment (competing systems).

The researchers found a separation in beliefs about how the economy is working versus how it should be working.  People believe the current economy is rigged by the wealthy, that there is hidden agenda in the media to perpetuate this, and that human nature is rooted in greed. Instead, they want to see an economy that is self-reliant to meet its basic needs, they look to the past good times, and they want the government to manage the economy  to ensure basic needs are met. They also want equality of opportunity, fair exchange and competition, community, honesty and transparency.

The focus on inequality, local production, and a role for government are key opportunity windows for talking about a community centered economy that we advocate for at the People’s Economy Lab.  However, the belief that people are greedy, and a tendency to point to individuals as the problem rather than institutions and social structures, is a major challenge. Additionally, simplistic notions about the economy as a pot of money, the environment as opposed to the economy rather than its bedrock, and fatalistic beliefs about economic change, are all barriers to overcome.

So what to do?

The report proposes two new narratives about the economy that they found were effective in shifting public thinking toward what we describe as a community centered economy.

The authors found that a story that has the values of equality or economic strength, the explanatory metaphor of reprogramming, and the connects the dots between corporate elites undermining equality or economic strength and action of reprogramming can be effective when used together.  However, without assigning responsibility to corporate elites, this story was not effective.

They also found effective a story about the value of fulfillment, that explained the economics thought the idea of laying economic train tracks, that connected how the economic tracks we lay make it difficult to lead fulfilling lives, and that we can rebuild the economy to get people to their real needs.  This is an alternative to the populist story. This story broadens people’s understanding of what the economy is about, not just money, and leverages a latent sense that our society is applying the wrong priorities. It asks, what is the economy for?

In both stories, its critical to connect the dots between the problem and solution;  The recipe of values and explanation are important to get right. Each story is effective is specific contexts. Read more about these strategies to frame conversations on the economy, including do’s and don’ts, they-say we -say, what common messages to avoid, like using game or playing field metaphors,  and much more by reading the full report.

Redefining The Economy to Meet Our True Needs